What happens when you feel limited by the available academic and extracurricular lineup? If you’re like 17-year-old homeschooler Zena Pare, you make your own opportunities. And then you share them with others.

Zena, who graduated with honors in May, spent her entire school career pursuing new interests and then finding ways to involve friends in the things she enjoys.

In 14 years with Girl Scouts, she not only earned the organization’s highest award, but also helped create a program for local homeschool students. She started clubs and participated in a wide range of sports—from performance jump rope to scuba diving.

“One Year at a Time”

All this because her parents were reluctant to entrust the education of their children to someone else.

Zena’s mom Cindi explained that when their son Granite neared kindergarten age, “We said: ‘We’ve got to sign them up for school.’” But Cindi was conflicted: “I can’t just give them to a stranger.”

She and her husband Grady discussed their options, eventually deciding that Cindi’s degree in elementary education more than qualified her to teach their own children—at least for a while.

Cindi recalled telling herself, “I’m just going to do this a year at a time.” But every time she finished a school term, her reaction was, “Oh, that was fun.”

Ultimately, their son homeschooled into the 8th grade, at which point he enrolled in public high school in order to continue playing baseball.

Zena stayed with homechooling for all 12 grades, but not because she was any less engaged in special activities.

As she put it: “I’m always trying to do new things. I just sign up for everything.”

Following the example of her former Girl Scout mother, at age 4 Zena joined a local troop where she met the girl who became, and still is, her best friend. 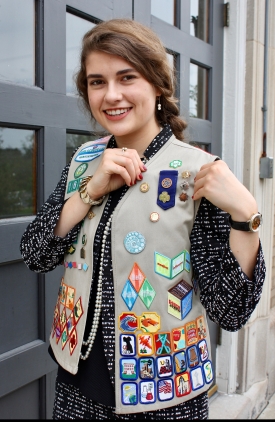 With Cindi volunteering as a leader and most of the troopers coming from homeschooling families, Scouts quickly became a nurturing environment for Zena and her friends to try things that most youngsters probably wouldn’t attempt at home—things like camping, canoeing, orienteering, windsurfing, kayaking, and climbing an adventure-style ropes course.

“It’s been so great for me,” Zena said, noting that some of her best opportunities through Scouting developed because she pursued them with gusto.  “You get out of it what you put into it.”

Zena also quickly found herself developing a desire to give back.

By middle school she and her best friend had tackled the first in a series of community service projects meant to qualify them for Girl Scout’s highest honors—the Bronze, Silver, and Gold Awards.

For the first award, the duo led monthly seasonal craft sessions for residents of an assisted living home. For the Silver Award, they promoted youth literacy by holding book-themed workshops, staging a book drive, and forming “little libraries.” They also created a local merit badge program for reading.

Zena’s Gold Award project, however, eclipsed both her Bronze and Silver. Through two-and-a-half years of high school, she labored 150 hours setting up numerous programs designed to benefit fellow homeschool students. Among other activities, she arranged self-defense courses, first aid classes, a book club, spirit days at her homeschool co-op, and a jump-rope demonstration. She also organized a local chapter of the National Beta Club.

“It was probably the biggest success,” Zena said of the local club, which still has 19 students on the rolls. The continued interest it generated helped fulfill a requirement for the Gold Award. As Zena explained, the work you do “has to be sustainable; it has to continue even when you complete the project.”

Another benefit of her Scouting efforts was recognizing something new in herself. This change became most apparent during tasks that did not involve hands-on effort, but did require a great deal of coordinating and delegating.

This meant that the Gold Award project, along with Scouting in general, “helped me to grow and be comfortable leading others,” Zena said.

But Zena’s service-oriented mindset is not limited to Scouting. As a young girl she also developed an interest in American Sign Language, which led to opportunities not just to assist others, but to make her mark as a student.

In fact, it was the offer of being taught by a certified interpreter and ASL professor at the local

university that encouraged Zena to continue homeschooling through high school. And it was the chance to keep studying sign language that prompted her to dual-enroll at Western Kentucky University (WKU) in 10th grade.

At WKU she joined the American Sign Language Organization, serving as secretary. To put her skills into practice, Zena has volunteered at a camp for deaf and hard of hearing children, helped with events at the Kentucky School for the Deaf, and volunteered in the children’s program at DeaFestival in Louisville. She helps sign the national anthem for university sporting events, has already completed the ASL Studies minor at WKU, and has a job lined up for the coming term in the school’s ASL language lab.

And none of this came at the expense of academics. Zena rounded out her high school coursework with several classes at WKU and the local community college, maintaining straight A’s while earning 43 college credit hours through dual credit and AP exams. She added to these exploits by returning impressive results on several college entrance exams.

At her mother’s urging, Zena and her brother took the PSAT, followed up by several attempts at the ACT.

“I was telling them not to expect it to be high,” recalled Cindi, as both students took the ACT for the first time in the 8th grade—much earlier than most.

Zena apparently didn’t listen. Her sophomore year she scored 32 on the ACT, which placed her in about the top five percent of students who take the exam.

This achievement, along with other academic awards and her extensive list of service and extra-curricular activities, earned Zena a generous scholarship to continue studying at WKU.

Reflecting on her success, Zena said it was probably to her benefit there was no definite, institutional program for her to follow. Assembling a custom education may have been challenging, but her experience shows that homeschoolers “have the opportunities, if we will make them or ask for them,” she said. “I think that builds the character that colleges like to see.”