You are here: Home » “Alright, That’s It! The House Is a Mess!” | Helping Kids Accept Consequences 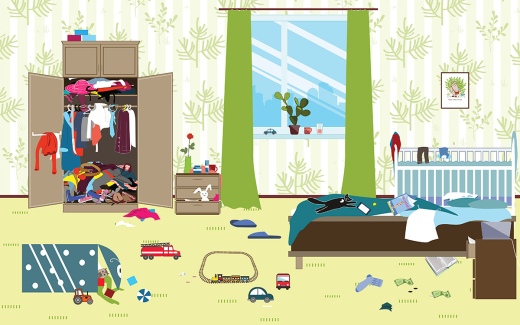 After I burst into tears of frustration about the new levels of mess that were accumulating on every surface of our house, and as I was bemoaning the reminders to clean up that are going unheeded by our children, my husband took action.

My husband sat down, in full papa-bear mode, and wrote out a list of fines the kids would receive for failing to pick up items on the floor. We threw in failure-to-make-your-bed as an additional infraction.

I was relieved he was taking up the gauntlet! Most of the follow-through with kids falls on my shoulders. So, when dad speaks, the kids’ eyes get wide and they take notice.

I recently read The 5 Love Languages of Teenagers by Gary Chapman. One thing that really stood out to me was that rules should be clearly communicated to kids, especially as they get older. Kids should not be blindsided. They should know that a rule has been violated and know in advance what the consequences are. They should also have some input when it comes to the formulation of the rules and the consequences.

“You will still continue to parent the teen,” says Chapman, “but you also know she is getting older and will start becoming more independent and wanting to make her own choices. This is good and healthy because soon she will be an adult and will make all her own choices.”

Chapman suggests that it is a good idea to have a family meeting to discuss rules and consequences and get a teenager’s input about what is appropriate and fair. “Tell her you want her thoughts and feelings.”

When a teenager’s thoughts and feelings are taken into consideration, you might be surprised that they feel a consequence should be stricter than a parent does. A teenager is also much more willing to receive a rule and a consequence that she herself has been a part of deciding to impose.

You will avoid future arguments about things being “unfair” if she decides with you ahead of time that a certain consequence is in fact equitable.

After discussing the rules with the kids and getting their input on whether the consequences were fair or not, we posted the list of fines on our refrigerator for all to plainly see.

We decided that most of the items left on the floor would incur a 10-cent fine, which doubles every day. On the fourth day, there is a one-week suspension. Some items, including the unmade bed, incur a 25-cent fine every day that also doubles and will ultimately result in suspension as well. Inspections occur every day at 9:00 AM.

The first week we decided to implement fake fines so the kids would see how much money they would have been charged, rather than charging them real money. We thought it was fair to give them a week to get their act together before imposing real fines.

“Our goal is not to crush you,” my husband told our kids. “Our goal is to help you develop good habits of organization and to develop work ethic.”

Like Chapman said, we found that having a family meeting to discuss the rules and consequences in advance, and getting the kids’ input, resulted in children who understand the logic behind the rules, feel included and respected, and are happy to go along with the new agenda. We had zero complaints from the kids. (I was in shock.) 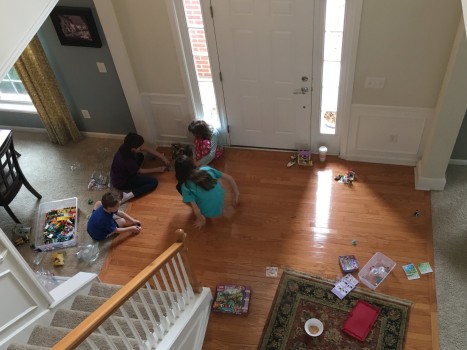 Sweet play time, and a mess to clean up afterwards.

The floor has been mostly picked up for about three days now and I want to pinch myself with elation. It feels almost too good to be true.

Amy is a second-generation homeschooler and a native Californian, transplanted to the Midwest. She loves reading good books, exploring new places, and going on adventures with her kids. View all posts by Amy Koons →

19 Comments on ““Alright, That’s It! The House Is a Mess!” | Helping Kids Accept Consequences”