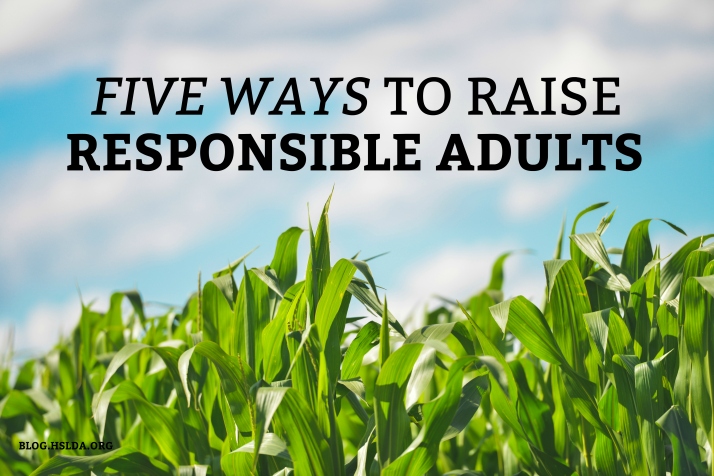 How do we raise our kids to become responsible, compassionate adults?

Recently, Darren read an article by Ben Sasse entitled “Perpetual Adolescence And What To Do About It” (note: The full article is available only to Wall Street Journal subscribers; if you aren’t subscribed, ask at your local library about accessing it through their system). Making no statement either way about Sasse’s politics (he’s a U.S. senator from Nebraska), Darren thought it was an important question to ask and wanted to discuss it with the family.

He printed off four copies—one for me, each of the older kids, and himself. We read it, made notes, and gathered in the living room to talk it over (Sparkler hung around for the discussion too; she’s refused to be left out of anything since she was born).

Sasse identified a problem of “perpetual adolescence,” one of “seeing so much less difference now between 10-year-olds and young adults in their late teens and early 20s.” I think he overstates the case, not to mention overlooking economic and cultural shifts that change the way adulthood looks and behaves. However, his solutions generated a lot of discussion.

He outlines five broad themes that inform how he and his wife raise their children. Below, I’ve summarized Sasse’s points and added my family’s commentary.

1. Resist consumption: teach children the difference between need and want.

Our commentary: Darren marked this one as very important in becoming an adult. Not just to spend money wisely and to be content with what we have, but because it teaches us to look beyond ourselves. If we resist turning to materialism to make us happy, we’ll have more resources to help those who have real needs.

2. Embrace the pain of work. Sasse emphasizes that hard work teaches children that difficult tasks are to be conquered, not avoided.

Our commentary: Both Bookgirl and Gamerboy named this point as “the most important one” for becoming an adult. They were surprised when we explained that the reason they had to consult a chore list every day at 4 pm was in preparation for adulthood. “Oh!” they said. “Chores count?”

3. Connect across generations. Sasse quotes a 2014 Boston Globe article which reported that among Americans 60 years and older, only a quarter had discussed anything important with anyone under age 36 in the previous six months. Adolescents, he says, acquire vital social skills by interacting with people outside their peer bubble.

Our commentary: We agreed that this was a lack in our family’s life. While the grandparents visit us as often as they can, we don’t live near any of them. We named people from church or the neighborhood who might be interested in coming over and talking to us about their experiences.

4. Travel meaningfully. Don’t just “tour,” says Sasse, but go out “in search of people, of adventure, of experience.” Whether it’s camping or flying overseas, “where” isn’t nearly as important as “how.”

Our commentary: Bookgirl and Gamerboy thought we did just fine at this. They like our trips, whether it was the big cross-country road trip we took last year or the day trips to local museums. Bookgirl even put in a plug to go back to the indoor water resort Great Wolf Lodge, which has uncertain educational value but sure was a lot of fun. Nice try, Bookgirl.

5. Become truly literate. Sasse and his wife encourage their children to become “quantity readers,” namely by a challenge called “The Century Club.” He says, “Quite a few people can read two solid books a week, but knocking out almost two a week for an entire year is daunting.” In addition to quantity, they also monitor their children’s reading choices for quality.

Our commentary: We all thought the idea of a Century Club, while kind of fun, did not suit our family. We’d all rather read fewer books that we really enjoy. However, we do believe in quality books along with mere enjoyment—Bookgirl has a big project underway to read all of the Newbery Medal winners. For the record, I named this point as one of the most important steps to adulthood. After all, most people can do hard work if they have to, but reading allows you to understand people and places that you may never see.

If Darren and I were to write our own thoughts on this subject, our points would be a little different. For one thing, our family prizes creativity, which these five themes didn’t really take into account. But it was a catalyst for us to sit down and talk about our hopes for our children’s future, and why we make the decisions that we do.

It also provided for one of those real pleasures of parenthood. We were able to say to our two eldest (and the third one who was listening in):

Which do you consider the most important theme for raising children into adulthood? Or what would you add to this list?