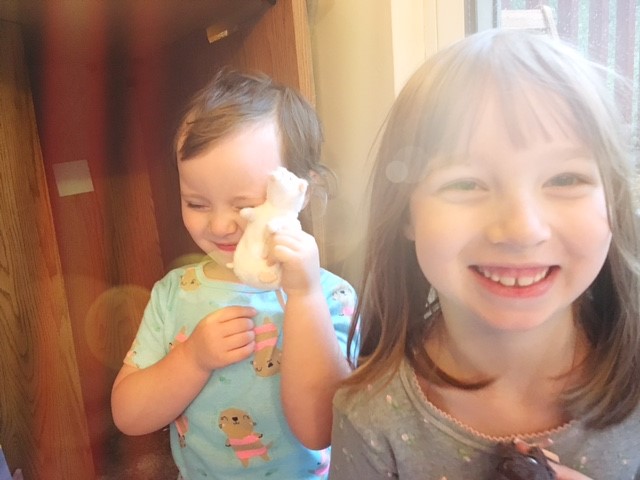 I decided to teach Latin this year to Meg, my first-grader, because she was very ready to start a foreign language, and I wanted to get her going on Latin. I picked Minimus: Starting Out in Latin by Barbara Bell, illustrated by Helen Forte. It’s aimed at early elementary level, integrates a lot of history, and looked incredibly adorable. We were joined by another family whose boys were starting Latin in Classical Conversations, I think, and whose mom was interested in some enrichment activities. We also had two little sisters tagging along.

I was cautiously positive at the beginning of the year. Now that we’re almost done, I can definitely say it didn’t do what I had hoped, though it keeps its good points. 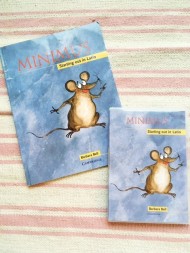 We all enjoyed the individual parts of Minimus for what they were: the comic book-style story, the “Roman Report” sidebars with history and archaeology, and the Greek and Roman myth retellings scattered throughout. I am still passionately fond of all the archaeological bits they included. Minimus himself is a cutie, scampering across pages. Meg connected with him emotionally and would shout advice: “Watch out, Minimus! The cat is coming!”

Illustrator Helen Forte has flashes of adorable, but her comics came out so unprofessional. The characters have odd lumps, and it looks like she drew them with a Uniball pen and colored pencils. Online webcomics can do better. I intentionally find my girls books by the best illustrators available because art matters too, so these illustrations were jarring to me.

I never felt like the book made the leap from presenting grammar and vocabulary to student comprehension. Part of this was the group I had to work with: they were very young and only one of my students could read independently. The others relied entirely on the verbal interaction, which there definitely was not enough of. If it had really been a conversational curriculum, we could have learned conversationally, but it wasn’t. I think to get the most out of it, every student needed to have his own copy of the text, be able to learn primarily by reading, and be willing to go over everything repeatedly. My crowd didn’t have anything like the attention span for that.

Some of the Latin words used in the stories were never defined. I think you were supposed to guess from context, but some of us have a deep need to know. There isn’t a glossary in the back or anything like that, so you need a Latinist or a dictionary available. The vocabulary words she did define were not gathered into a single place, but scattered throughout so we had to flip through every page.

Oddly, one of the stories had only one Latin phrase. The rest was entirely in English. I was so confused.

The audio CD also disappointed. The recording quality was unprofessional. The narrator just read the words of the comic book strips (though with a delicious British accent), so that you couldn’t follow the action without the book, but it was hard to keep up with the right place in the book. I’m sort of regretting the purchase, because I can perfectly well read the comic strips out loud myself. I had hoped it would be the sort of CD I could play in the car over and over so we could familiarize ourselves, but no.

I would have liked to see concrete exercises and activities to help the students remember the introduced concepts. Translation and practice sentences would have been good. I think Bell thought she included activities, but they required the student to already understand and remember everything. My group just couldn’t.

I would also have loved more supplemental information on Vindolanda, the real place where the story is set. The history element still makes me go, “squee!” They have a website and museum. But unfortunately, to get things like a map of the area, you have to go to the archaeological site’s gift shop. In England.

Maybe I expected too much from Minimus? I’m a grammar and history nerd but an inexperienced educator, so I’m probably not greatest test audience. I want something that would help me actually teach Latin. We don’t have to get very far, but I want my students to definitely know something at the end.

I think Minimus would be a lovely supplement for a different curriculum, because it does have a lot of fun content going on. So what did I do to teach Latin this year? Stay tuned for my next post.

One thought on “Curriculum Review—Minimus: Starting Out in Latin by Barbara Bell”