You are here: Home » Confessions of a Mother Bird

Daisy* was near tears. “But why can’t I do it?” she protested.

“I’d just like you to be a little older first, honey,” I answered, trying to choose my words carefully. “I’m not really comfortable with you doing that by yourself.”

“It’s not fair!” she exclaimed. “You’re treating me like a baby. Why are you so overprotective?”

I stopped, startled. I’d assumed these kinds of conversations would happen eventually, but I can’t say I expected them before my oldest had even hit double digits. Of course I felt I was being pretty reasonable, but this outburst hit me like a splash of cold water. Was I being overprotective?

This conversation from about a month ago has been challenging me ever since. While I want to make sure I’m giving my kids enough freedom, I have to admit, there is a part of me that is still afraid to let them out of my sight. There are always stories going around that make a mother’s heart anxious…if not the ones about children being abducted off their own streets, then the ones about parents getting arrested for neglect or child endangerment!

The awareness of potential perils can, of course, be a good thing in some ways. I’m thankful for the development of things like more secure car seats, upgrades to unsafe playground equipment, and generally greater awareness of common childhood dangers.

At the same time, however, I feel that our generation of parents can sometimes fall prey to the idea that if we just try hard enough, if we just follow the right procedure and remain vigilant, our kids will never get seriously hurt. We fail to recognize that, while we certainly have a significant role in keeping them safe, some things are simply beyond our control. They are going to get hurt sometimes. And while there are certainly some who allow their children too much freedom, it is possible to go too far in the other direction as well, unintentionally hindering our children from proper growth. 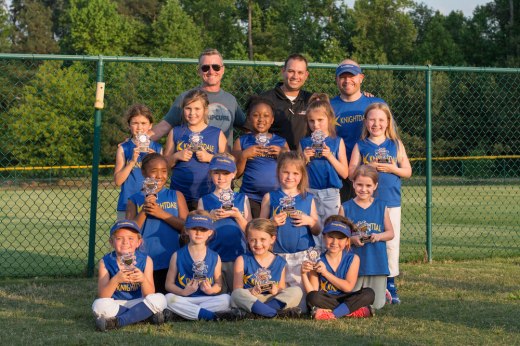 Daisy is in the middle row, right side.

Some people would say that homeschooling itself creates this kind of problem, making our kids too “sheltered.” I heartily disagree with this notion, of course, but I do think homeschooling can offer more temptations for naturally protective parents. I may bristle at the idea of being called “overprotective,” but as I was getting ready to drop Daisy off at her first softball practice last year, it occurred to me that, beyond church childcare and the occasional babysitter / family member, this was one of the first times I’d ever left her alone. Quite possibly it was the first time she’d ever been somewhere without a parent or sibling in the immediate vicinity. She and my other children are rarely outside of my personal supervision. I usually even end up going with them to friends’ houses to visit with the friend’s mom!

It struck me as very different from the average child, who is away from their parents for half the day most weekdays by the time they are five or six, if not earlier. Daisy was almost nine at the time I had this realization. Don’t get me wrong – I am thankful for the opportunity to stay at home and teach my children. I think there are many reasons that this is a good thing. But I also don’t want my supervision in their lives to be so close and so constant that they begin to feel smothered.

As I think about it, though, it’s not always a matter of mother bird wanting to keep her babies under her wing. As homeschoolers, my kids spend most of their time near me by default, and we have to go looking for opportunities for them to do things elsewhere. More outside activities means more effort, more expenses (usually), and more time commitments. It can be hard for me to work up the enthusiasm for something that feels like an inconvenience to our usual schedule and budget.

But the more I’ve considered this issue, the more I want to get my children involved in activities that get them outside the home, to expand their horizons and let them stretch their wings in an arena where I will (hopefully) be less tempted to hover over them so much. Having them participate in local activities – sports, church activities, day camps, etc. – may not be a huge step toward personal independence, but at least it allows them more chances to build confidence in themselves and pride in their own accomplishments.

Further, I want them to have more freedom to make choices without direct parental input. One day, sooner than I realize, they will need to be able to function in an adult world, making life-changing decisions on their own. If I dictate most of their choices for them, it may protect them temporarily from harm. But I may do more long-term damage, either by hamstringing their confidence to make decisions on their own, or by inadvertently pushing them away with my lack of trust in their judgment.

Granted, our biggest argument so far (mentioned above) was over something relatively inconsequential, and I plan to allow Daisy to have her way on it very soon. I don’t really know what it’s like to have a teenager wanting to do something I feel is unwise or unsafe, but I’m pretty confident that this will not be the last time I’m called “overprotective.”

I hope, however, that I can apply the principles I’ve long considered about giving my children opportunities to test their wings, even giving them a little shove out of the nest when necessary. I may wish to keep them under my wing as long as possible, but I know in the end that the best way to teach them to fly is just to let them do it.

Clearly, though, I’m still in the early stages of where the balance lies between too much and too little independence.

How do you let your children stretch their wings in age-appropriate ways?

Jessica is a full-time mom to her four young kiddos, a part-time professional photographer, and a most-of-the-time student of human nature. A scatter-brained dreamer at heart, she is thankful for her practical husband who helps keep her feet on the ground. One of these days, she really would like to write that book or start that career that will change the world, but for now she contents herself with changing the world in a smaller way, one dirty diaper or load of laundry at a time. View all posts by Jessica Cole →