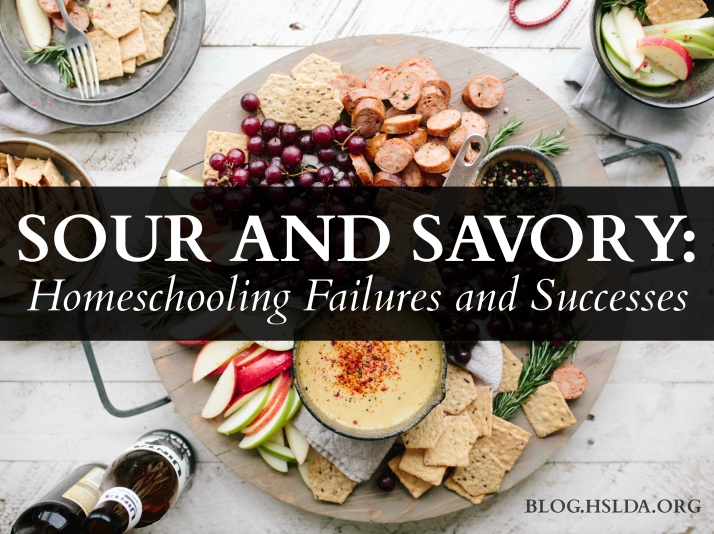 Homeschooling is like making a good soup. Everybody has different ingredients and a different way to cook them, and sometimes you’ve got to experiment to figure out what’s best for your own family.

Darren and I are in our tenth year of homeschooling. We’ve researched, talked with other homeschoolers, and read books—and we’ve done a lot of figuring-out-as-we-go. Here are a few of the challenges that our homeschool has faced over the years. Some of our solutions added to the rich, savory flavor of our soup. And some, well, went kind of sour.

HANDWRITING. None of our kids have what I’d call polished and fluent handwriting. As someone who always took great pride in her handwriting, I’ve been deeply frustrated by my own children’s lack of enthusiasm and ability.

The Sour: We tried copywork. We tried handwriting workbooks. We tried free writing. We tried letters to family. We tried simply copying the alphabet over and over. Nothing really took very well, and a lot of it was a complete disaster.

The Savory: I did manage to teach the basic letter formations, and the kids can read cursive even if they’re not good at writing it. As the kids get older, they take ownership of their own handwriting and make more of an effort if it seems important.

KIDS EXPERIENCING A CLASSROOM SETTING. Because college and even career training involves traditional classrooms, we want our children to be familiar enough with the setting to be comfortable.

The Sour: One reason why we homeschool is because our older two, especially, are not suited for classroom learning. Last year we signed up three children for classes at a small Christian school, and by the end of the year we all agreed that nobody enjoyed it much.

The Savory: The classroom experience can come through many situations—including church, co-op, Boy Scouts, and 4-H meetings or training. Those formal classes weren’t very fun for the kids, but they learned how to operate within the structure.

FINISHING SCHOOLWORK. I don’t know about yours, but my kids tend to “forget” to do assignments they don’t really like doing. 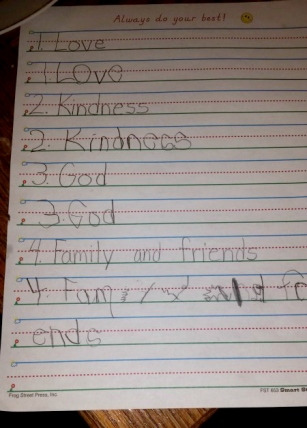 Can you tell the point at which I got distracted and left Ranger to do his handwriting on his own?

The Sour: Since the Teacher is also Disciplinarian, Cook, Chauffeur, and Mom, she can’t always come behind and make sure it’s all been done. And a lot of it didn’t get done, which meant Mom yelled a lot and the kids cried.

The Savory: We realized that Darren needed to be much more involved. This includes bringing the assignment planner to the dinner table and checking up with each kid. “Did you read this? Did you do this math lesson? Are you all finished with this?” The kids know that when I tell them to do their school, Dad is going to follow up that evening. They prefer to be able to answer “yes!” to his questions.

LYING. Sometimes our subtler children tell us that, yes, they have finished their work when they actually haven’t.

The Sour: Either we take them at their word, overlooking the fact that kids’ virtue is still maturing and they need to be checked up on; or we suspect every answer is a lie and damage the relationship between us.

The Savory: Our children are accountable not only to us, but to tutors or co-op teachers as well. Communication with these teachers makes it easier to catch and deal with a problem early on. On a spiritual level, we emphasize that lying isn’t just “bad;” it can permanently break trust. But in all honesty (haha), this is not a problem that we’ve solved. It’s hard to strike the balance between trust and accountability.

LAZINESS/INAPPROPRIATE CREATIVITY. One kid draws pictures with all the numbers instead of finishing the math lesson. Another kid’s response to “answer the following questions” is merely a list of one-word responses (including “I don’t know”).

The Sour: In an attempt to squash laziness, a parent can leave no room for creativity. On the other hand, my kids figured out really soon that I prize creativity very highly and often pull the “but I was being creative” when I say it’s lazy work.

The Savory: We try hard to discern whether a child is being lazy, or merely making a dull lesson more interesting. If it’s laziness, then we require a do-over. As long as we see real improvement, we don’t insist that it be perfect. If it’s creativity, we try to make room for it. Usually we accept it (Gamerboy enjoys wildly misspelling words in his email subject lines “juss fer kix”). Sometimes we say, “This time I need you to do it exactly like I outlined it.”

MENTAL BLOCK. When a student simply can’t see past a certain concept and move ahead.

The Sour. Math always came easily to Gamerboy. I used to write the answers to his multiplication problems because he could multiply before he could write. Then he got to algebra, and it was no longer easy for him. He found the work frustrating and the concepts opaque. He finished his eighth-grade year without really understanding algebra. How was he supposed to master Algebra II in ninth grade?

The Savory: Darren (who teaches the math) decided to give Gamerboy an “eighth-and-a-half grade” year. He held off on advancing him to ninth-grade math, and instead is having him repeat last year’s algebra book. Gamerboy isn’t breezing through it, but he is understanding it this year, without having to master it on someone else’s timeline.

We’ve done a fair amount of figuring-out, and we’ve got a lot more to go. You might face different challenges—or even have the same ones we do, but your answers are different from ours.

That’s because, as homeschoolers, we simmer a personal blend of ingredients to create a nourishing education for all of our children.

What are some of the Sour and Savory experiences you’ve had?

One thought on “Sour and Savory: Homeschooling Failures and Successes”