“All it saves is time, son. And what good is time, with nothing to do? You want to sit and twiddle your thumbs, all these stormy winter days?” –Farmer Boy, by Laura Ingalls Wilder

In the Little House series, there’s a telling contrast in worldviews between Almanzo’s Father in Farmer Boy and Laura’s Pa in Little House in the Big Woods. Pa jubilantly recounts to Ma the efficiency of the new threshing machine, which he took the initiative to hire out and bring to the farms in the area: “That machine’s a great invention! Other folks can stick to old-fashioned ways if they want to, but I’m all for progress. It’s a great age we’re living in. As long as I raise wheat, I’m going to have a machine come and thresh it, if there’s one anywhere in the neighborhood.”

Almanzo’s Father, on the other hand, disdains those modern farmers who employ new-fangled contraptions: “That’s a lazy man’s way to thresh. Haste makes waste, but a lazy man’d rather get his work done fast than do it himself. That machine chews up the straw till it’s not fit to feed stock, and it scatters grain around and wastes it.”

In the spirit of scientific research, I think I have determined exactly the right formula to measure whether an invention is an efficient, time-saving device, or a silly, lazy shortcut: whether or not I would do it.

For instance, I use microwaves, washing machines, and dishwashers. Those are clearly marvels of modern invention, and well worth the investment. Manually performing all the tasks that these machines accomplish for me would require far more time, effort, and materials than I am willing to put forth, and besides, these machines use far less energy than it would take to do it the long way. It’s definitely a cost-effective solution.

Well, I’ve never tried pre-cooked bacon, so perhaps I shouldn’t knock it sight unseen. (But obviously, I do it anyway. Knock, knock!) However, I had the unique opportunity to review the contact solution when I got it for free once, using coupons and a rebate. And, while it worked nicely and saved maybe a few seconds of my life every night, I must reiterate again and again that the only reason it worked for me was because it was free. Otherwise, I would never have tried it.

The premise is that instead of pouring contact solution into your palm and rubbing the lenses for five seconds, you pop the lenses into the special upright case, fill the bottle to the fill line, and soak the lenses overnight, where an intense solution that includes hydrogen peroxide cleans the lenses for you. If your time is so valuable that you can’t spare five seconds to clean your lenses like the rest of the peasants do, then this product might be for you. On the other hand, you spend about that long fitting the lenses into the special case, filling the bottle, and screwing it together, so I guess this really only works for those people that, for some reason, really hate washing their contacts. But you still have to stick your finger in your eye.

The 4-oz bottle lasted me less than a week, so for a $6.99 bottle, that would come to over a dollar a day, just to get out of washing my contact lenses. This strikes me as a very expensive way to get out of doing work.

Then there are the laundry balls, which I haven’t actually tried yet, but which I can’t help feeling must fall far short of their touted ability to help one keep up with the wash. How many times have you found yourself thinking, “I really must run a load of laundry today!” and then followed up that thought with, “Oh, but that would entail measuring and pouring a capful of detergent! Oh me, the very thought is exhausting! Perhaps I can put it off for another day”? No, nor I. I can’t speak for the majority of the desperate housewives out there, but as for me and my house, the thing that prevents us from keeping up with the laundry better comes in the putting-away department, not in the loading-the-washing-machine stage. 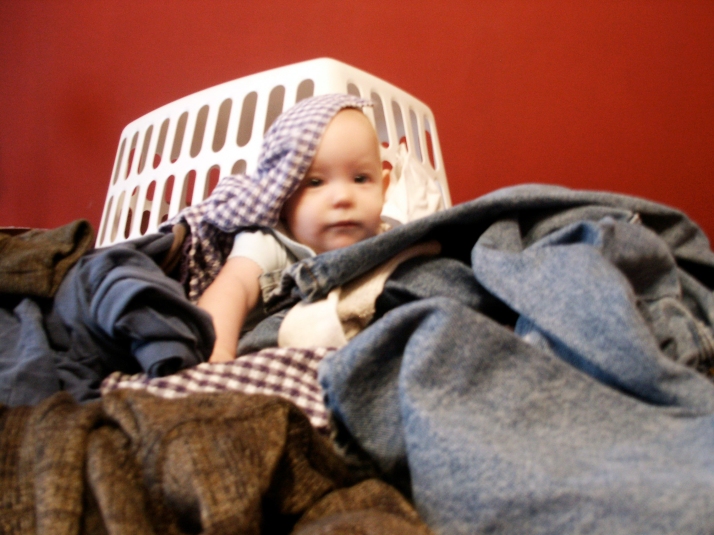 Now, having brought up laundry problems, I have to dash off on a little rabbit trail, because laundry is the one department we don’t have problems with. I know it’s common for mothers of large families to lament the difficulty of keeping up with ALL THE LAUNDRY, but we’ve never had a problem keeping up, and I think it’s because we—you guessed it—keep things simple.

How have I not written a post about laundry yet? I don’t have any great system or science to offer—in fact, I learned from Carolyn’s post that hot water is harder on fibers than cold, which means that for reasons of frugality I accidentally stumbled on the best method—so really, it’s simply a matter of what works for us. We don’t fold most things; we just put kids’ clothes away in the proper drawers. Anything that needs to be hung up is laid at the end of the nearest bed for an older child to put away. I help out with the huge things like sheets and blankets, and we fold towels and napkins simply in halves until they fit nicely on the shelf or in the drawer. So putting away laundry is not a really big hassle for our family. A five-year-old could do it. In fact, he usually does. It’s better than twiddling our thumbs all those stormy winter days.