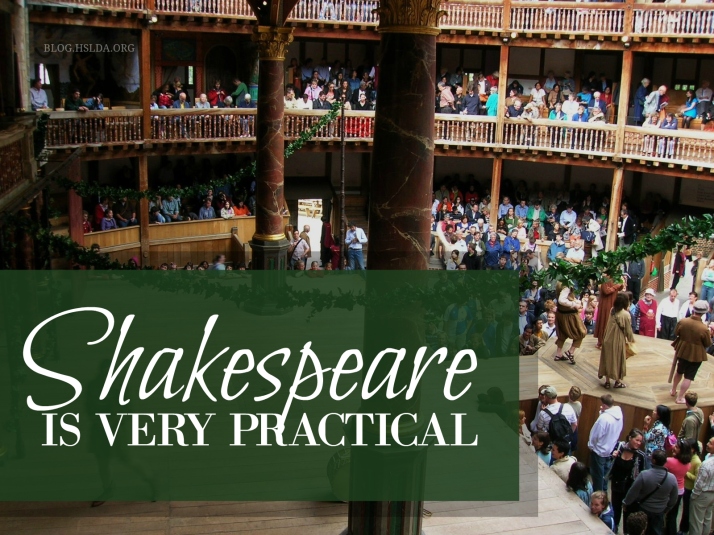 I adore science, especially when I can admire it and not have to actually do calculations or experiments. It’s like being an armchair traveler – does that make me an armchair scientist? Anyway, magnets make me especially happy. I keep buying magnetic toys for the girls, mostly because I like them. I’m sure they’re very educational, as evidenced by the magnetic education I received with a little help from the Bard himself.

I don’t know if you remember a few years ago, when magnetic nail polish came out, but I wanted some. I REALLY wanted some. However, it was absurdly overpriced, and my need for The Deal won out over my need for magnetic beauty products, and I regretfully shelved the want. But then recently I found some at Marshall’s for only a dollar a bottle, so I splurged and bought two, green and gray.

Magnetic nail polish is not itself magnetic, so that the wearer goes around destroying laptops and sticking to the fridge.[1] The polish has tiny iron bits in it and the magnet is in the cap. You wave the magnet over your freshly painted nails and create cool patterns.

At least, that’s the idea. But I tried it and…nothing happened.

When at first you don’t succeed, try reading the directions. I will take that as an axiom.

So in that spirit of open-mindedness, I looked to the directions that came with the bottle, which had perfectly comprehensible English labels all over it, and the only directions I could find were in French. It was a blasted nuisance, because I never took French. I grew up in the Southwest rubbing shoulders with Spanish, and then I took Latin, thank you very much. There should have been an English translation, and I found it later, hiding, but I sure couldn’t find it when I needed it.

I really did want the nail polish to work, so I studied the directions more closely. I never took French, it’s true, but I grew up on Shakespeare and British murder mysteries. All of those are full of French, and Sayers didn’t even always bother to translate it. So maybe… 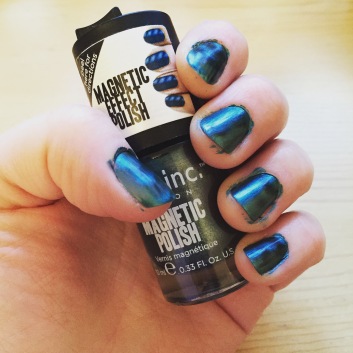 Do you remember that scene in Henry V where Princess Katharine gets an English lesson from her maid?[2] It’s entirely in French. I memorized that scene for speech and debate in high school. Katherine asks about la main, les doigts, and les ongles. Oh yes: Shakespeare wrote about fingernails in French. Everyone remembers “de niles,” as Emma Thompson played it.

So bolstered by the British literary tradition, I read the French directions. Phrases like immediatement, maintenez cette position de 10 a 15 secondes, and repetez le tout sur le autres ongles – ongles! I know that word for sure! — seemed clear enough. Try painting and putting the magnet over one nail at a time, holding it there 10-15 seconds, and then go on to the next nail. And it worked. The magnetic effect wasn’t as pronounced as I was I expecting, but it gave a lot of depth to the green, darker and lighter aspects, sort of a shimmery texture.

I’m not sure what Shakespeare would think of my use of his play. He had words about women who painted themselves!

[1] That would be awesome agent provocateur nail polish. Somebody write that story.