Every week leading up to the 2016 Primary Season, HSLDA will post a profile for one of the 2016 Presidential candidates on Homeschooling Now, highlighting where each stands on the Common Core State Standards Initiative. For more information on the Common Core, check out our free resources at HSLDA.org/CommonCore.

“The Common Core State Standards provide clear grade-by-grade goals for what students should know about fractions, built on the best practices of high-performing countries. In literacy, what most predicts college readiness is the ability to read and understand complex texts. The Common Standards set clear benchmarks for each grade for students reading sufficiently complex texts in English, history/social studies, science and technical subjects. … The Common Core State Standards are an example of states recognizing a problem, then working together, sharing what works and what doesn’t.” —2011 Article by Bush and Klein, “The Case for Common Educational Standards”, via The Wall Street Journal

“I think [Education] Secretary [Arne] Duncan and President Obama deserve credit for putting pressure on states to change, particularly the states that haven’t changed at all. They’re providing carrots and sticks, and I think that’s appropriate.” —MSNBC’s “Morning Joe” Interview, September 2011, via the Washington Examiner

“I just don’t feel compelled to run for cover when I think this is the right thing to do for our country. And others have, others that supported the standards all of a sudden are opposed to it.” —Interview with Fox News, 2014, via The Wall Street Journal

“Raising expectations and having accurate assessments of where kids are is essential for success,” Bush said during a recent stop in Des Moines, Iowa, “and I’m not going to back down on that.” —April 2015, via the Washington Examiner

“Because people have a different view of what Common Core is, am I supposed to back away from something that I know works?” —Appearance in Nashville, TN, State’s GOP Dinner, May 2015, via CNN 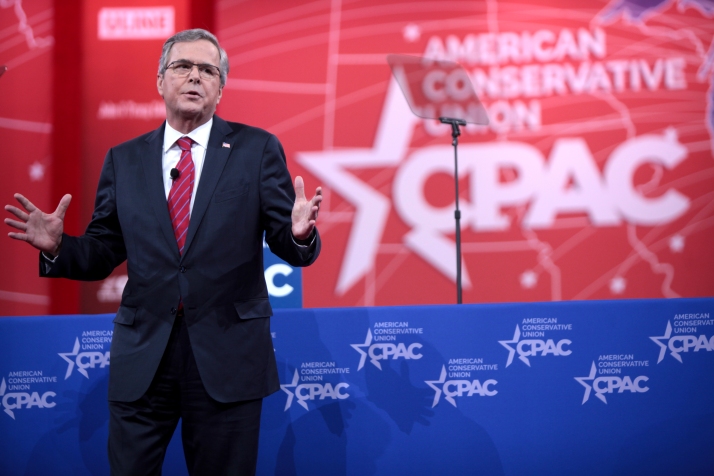 SUMMARY: Bush has long been a proponent of the Common Core, setting him apart from the vast number of Republican politicians disavowing the new standards. Unfortunately for Bush, this stance alienates him from a large portion of the voting base who feel strongly against Common Core, and he has since tried to distance himself from the politically-charged issue altogether.
After Bush left office as governor of Florida in 2007, he launched the Foundation for Excellence in Education that became a leader in developing and promoting Common Core. In the years following, Bush would write articles and make statements in support of the Common Core.