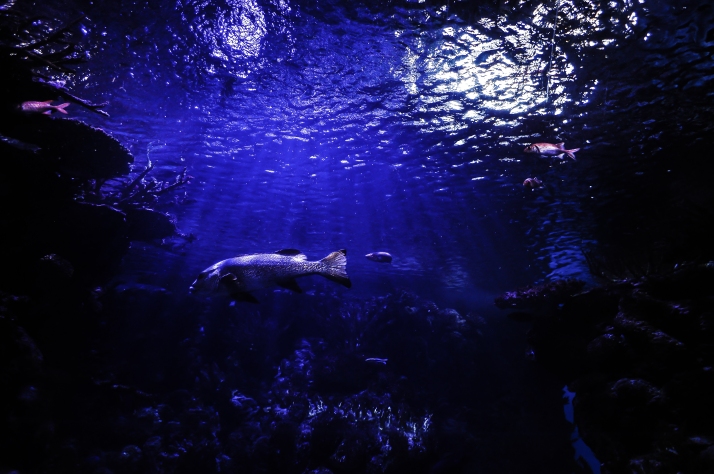 Ancient Assyria was such a nasty place. The archaeology is interesting, but it would have been a horrible place to live – and especially to live next door to. However, it was pretty major in ancient history, so Meg and I learned about it. Briefly. We carefully kept it age-appropriate.

One of my favorite techniques for history is to tie new things to events she already knows about. And remember which prophet got assigned to go preach to Assyria? Jonah! Meg definitely knows the Bible story of Jonah, so while we were in this unit, I intentionally connected “Jonah in the Bible” with “Ancient Assyria.”

We drew a map on big paper, making sure to get Israel, the Mediterranean Sea for Jonah to get swallowed in, the Tigris and the Euphrates because we’ve drawn them on maps lots of times, and of course Nineveh. We also added a few other cities we’ve studied.

We did casting for the story. Jonah was played by Kwazii Cat of the Octonauts. The Imaginext pirates and a ninja got to play the Assyrians. Then we collected a tasteful assortment of minor characters, sailing ships, big-fish-shaped submarines, hills for Jonah to sit grumpily on, and so forth.

For the story itself, I read it straight from the Bible. Meg has heard retellings often enough that I thought she needed the more detailed version. She has a hard time sitting still for long Biblical passages, but conveniently, when directing a cast of toys, you’re not sitting still.

So the word of the Lord came to Jonah… there he is, in Israel… to go preach to Nineveh.

But Jonah went down to the Mediterranean Sea and boarded a ship going to Tarsus, captained by Captain Barnacles. A great storm came up and Barnacles came to Kwazii, saying, “Why are you sleeping? Wake up and pray to your god!” Jonah told the captain that he believed in the God of the land and the sea, and the storm was for his benefit, because he was trying to run away from his God. It was a terrible life choice.

About this time, I stopped my other daughter, Kate, from trying to load all the Assyrians into the fish submarine. Its cue was coming up.

So Barnacles threw Kwazii overboard, and Kwazii sank down and weeds wrapped around his head, until a great fish swallowed him up. SNARF! He was in the fish three nights (I turned off the room lights) and three days (I turned them back on) until the fish vomited him back onto dry land. SHAKE SHAKE SHAKE! 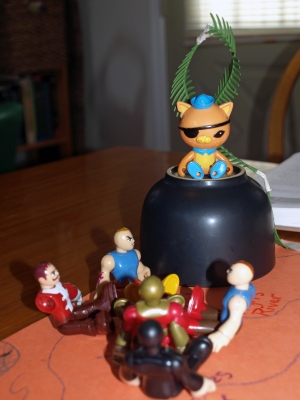 The word of the Lord came to Jonah a second time, saying, “GO PREACH IN NINEVEH.” And Kwazii got up and went to Nineveh. We trotted him all the way across the map. He went across the city for three days, saying, “Repent or the city will be destroyed. Grump grump.”

And the King of the Assyrians… there he is, standing on his passage… sent out a proclamation and everyone took off their cool outfits and fasted and repented.

Kwazii, meanwhile, climbed a bowl to the east of the city and watched, hoping for fireworks. But God DIDN’T DESTROY THEM. He didn’t destroy them even though they were horrible Assyrians and pirates and a ninja and stuff. It was the worst.

Meg built a Playmobil plant to make shade over the bowl, and it made Kwazii really happy.

Then Meg sent a worm to attack the plant, which it did with great exuberance, and the plant fell over and died. Kwazii threw a tantrum. God pointed out, in the narration, how Jonah had pity on the plant even though he didn’t make the plant, and shouldn’t God have pity on a city full of people he did make? Not to mention all the cattle?

I think the book of Jonah intentionally leaves you hanging, with that question. You want to know if Jonah got over his snit and whether he got home all right! Jonah doesn’t have that tidy ending. It demands an intellectual and emotional response, the kind that grows with you. I pointed out one of the morals of the story – God will forgive even Assyrians if they repent – and Meg said, “Okay.” She’s not really at a point where that is meaningful. But she is playing through it on the story level.