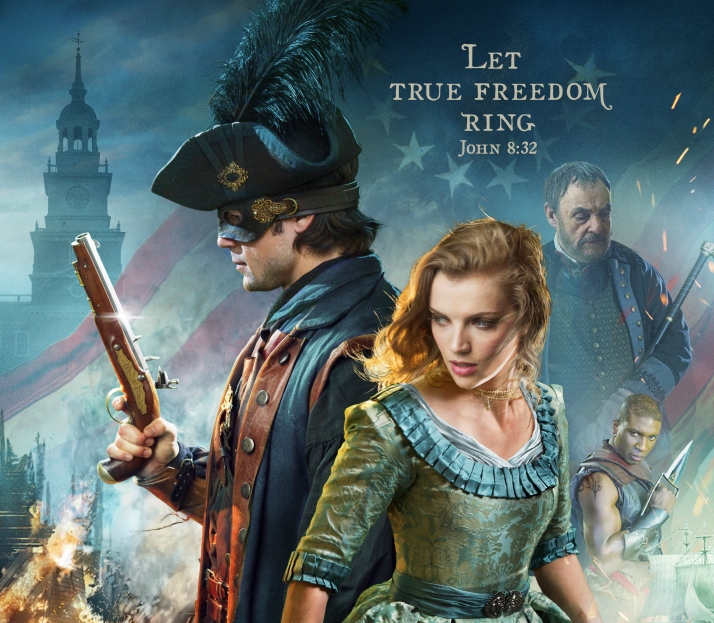 WHAT IS BEYOND THE MASK?

Coming to theaters June 5, Beyond the Mask is a revolutionary new family film that brings history to life in a faith-filled adventure celebrating grace, liberty, and the true freedom that can only be found in Christ.

“The leading mercenary for the British East India Company, Will Reynolds has just been double-crossed and now is on the run in the American Colonies. Working to redeem his name and win back the affections of the woman with whom he’s never been fully truthful, Will now hides behind a new mask in hopes of thwarting his former employer. As his past life closes in on him, Will must somehow gain the trust and the help of his beloved Charlotte – as well as Ben Franklin – while he races against time to defuse a plot of historical proportions. As Will Reynolds discovers, if we let true freedom ring, history can be redeemed!“

The Hollywood Reporter said that Beyond the Mask aims to top “Theater-On-Demand” release record.

And the well-loved John Rhys-Davies, known for his role as Gimli in the Lord of the Rings Trilogy, praised the movie and homeschoolers:

“I sort of like mavericks who challenge the Hollywood studio system,” Rhys-Davies said. “There are many subcultures in the U.S., and they always defy my expectations, and I welcome homeschoolers. I find them keen and enthusiastic, with a moral code and impressive integrity. I really liked working with them — and they made a jolly good romp of a film.”

REVIEW OF BEYOND THE MASK

I was privileged to personally get to see Beyond the Mask last fall. I’d been following along with the creation of the film since I had first heard about it a couple years ago. I even ripped out the promo poster from a magazine and put it up somewhere prominent so I’d be reminded to keeping checking on when it would release in theaters.

When I first sat in to watch the movie, even as excited as I was, I was still hesitant about just how good this movie made by homeschoolers would be. Let’s just say, working at HSLDA for over 3 years, I’ve had my fair share of homeschool independent projects (film, books, video games, you name it). So I watched it not expecting too much. But by golly, was I pleasantly surprised!

When the credits rolled at the end of the movie, I was taken aback at the quality, content, and visual effects of Beyond the Mask. It was just brilliantly done.

It’s an action-packed film pre-Revolutionary War adventure with a stellar cast (including John Rhys-Davies, Andrew Cheney, and Kara Kilmer), great production by Aaron Burns and directing by Chad Burns, phenomenal writing by Paul McCusker and Stephen Kendrick, with an underlining theme of redemption.

I don’t want to give away too much of story, for I’d love you to see it for yourself. But just the opening scene will have you hooked, as Will Reynolds (played by Andrew Cheney) participates in some devious plan concerning stolen documents at the dead of night.

“I hope Beyond the Mask can be a story that triggers thoughts about forgiveness in its audiences, prompting questions about it. And then maybe to come to similar conclusions. Because apart from faith in Christ, you can’t earn redemption. [But] I’ve been doing drama a long time, and I’m finding, more often than not, what we have to do is come up with an excuse to talk about the faith within a story. In other words, you’re setting the stage that has all the components of good storytelling—which would be plot, characterization, all of those things. But it’s kind of like C.S. Lewis said about the Narnia stories: ‘If people get the faith aspect, that’s great. And if they don’t, at least hopefully they’ve heard a good story.’ And I think that’s probably the better way to do things.”

I’m a young adult, who (if I may say so) has a very particular set of requirements for the movies/TV shows I choose to watch, and I couldn’t be more impressed with homeschoolers Aaron and Chad Burns’ Beyond the Mask. It met and exceeded my expections. It’s a good mix of historical fiction, a bit of romance, adventure, drama, and faith.

If you are concerned with the action sequences or any romantic content of the film, I encourage you to check out a more in depth review of Beyond the Mask by Plugged In:

“Can a bad man ever truly be good? That’s the core question in Beyond the Mask … The film’s answer is that while good intentions can bend a person’s moral trajectory a bit, ultimately God is the only one who can thoroughly redeem the tainted human heart.”

Readers, if you like action and adventure, history, espionage, mystery, bravery, drama, or even romance, Beyond the Mask is a film you need to see!

It’s in theaters June 5, so be sure to find a showing near you!

Photo Credit: All graphics via BeyondtheMaskMovie.com