I’m a book person. I love to read lots of different kinds of books for my own pleasure and learning and I also love to read children’s literature out loud to the kids.

It always thrills my heart when I see my older two kids pick up books and read of their own volition.

For my oldest daughter, this came slowly. She always enjoyed being read out loud too, but never seemed interested in reading on her own. I worried. I prayed. I scanned the internet for ideas. I confided in friends. I worried some more. I put all sorts of varied reading material where she would happen across it. I let her pick books out at the library, but they always collected dust, unless I picked them up to read them to her. I always gave her the option of staying up later at night, if she wanted to read in bed. I heard about other children her age who were already reading gigantic tomes. And I worried a little bit more.

Then, just like Leo the Late Bloomer, halfway through third grade, she bloomed! And not only did she suddenly show an interest in reading on her own, she became addicted to Rick Riordan books. We finally found a genre that she loved—fantasy. I think studying Greek Mythology in third grade helped to pique her interest. She also had friends who talked to her about these books and encouraged her to try them. We also let her watch the corresponding movie after she finished reading each new book and that was a great incentive for her.

Now it’s my second grader’s turn to be nurtured into independent reading. Although I’m a little less worried about her because she likes to read picture books, I would like for her to start chapter books because I think she is definitely capable.

I read the original The Boxcar Children book out loud to her and her sisters. After a little nudging on my part, she decided she could read one of the many sequels, The Mystery in the Old Attic, on her own before bedtime.

After two weeks, she had made it through two chapters. Since she is a really good reader, I decided to encourage her to do more.

“Hey, Clara!” I said, “This book looks really interesting. I’m wondering what mystery there is in that attic, and what clues there are along the way. Can I read it too? Maybe I can figure out the mystery before the end of the book. Can we have a book discussion? Maybe we can make some hot chocolate and discuss this book together.”

Since this particular child would sell her soul for any form of sugar, I figured I had her as soon as I said “hot chocolate.” It would not only sweeten the deal, it would seal the deal.

Much to my great surprise, there were quite a few things to talk about in those first two chapters.  I never would have guessed! [No offense to authors of basic children’s chapter books.] 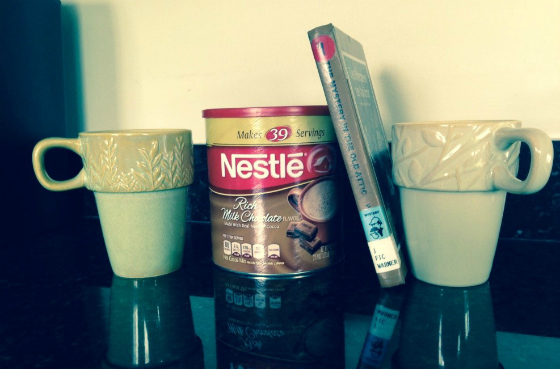 The kids in the book took a puddle jumper to get there. We talked about what that is.

The kids’ great aunt owned a mansion with a ballroom. We talked about wealth and what Clara would do if she had lots of money. I asked her if she would rather own a mansion or travel and see the world. She said she would like to have a medium-sized house and see a little bit of the world.

We talked about the characters who had been introduced so far. We discussed a suspicious professor who lived in the house and didn’t seem to like children.

There was also a mysterious portrait hanging in the dining room. We wondered if this was a decoy or if it would become part of the central plot. Hmmm.

You know, I had a delightful time discussing a Boxcar Children book with my seven-year-old daughter. Initially I planned to read this book as a mom-sacrifice, to encourage my daughter in her reading. But it became more than that. It turned into thirty pleasant minutes of quality time with my little girl.

Within a week, she finished the rest of the book. I have a few more chapters to read and then we are going to schedule another discussion, complete with hot chocolate, I’m sure.

I call that a sweet success, in more ways than one.