Me, as a member of the press, talking to the gold party hack

My youngest son John has been attending GenJ’s iGovern East this week at Patrick Henry College. “Mom, can you help out at the Gala Tuesday night? They need volunteers to be lobbyists”

“Sure, I guess so,” was my reply, meanwhile thinking, “I’m doing this for you, son!” I know what a lobbyist is, but had no idea what I would be doing if they did sign me on to be a lobbyist! Little did I know I was going to be given a completely different assignment at the big Gala.

iGovern is a camp for homeschool kids 14-18, to learn about the legislative process and work on their party’s presidential election. It’s been a very busy week for John and the other students, filled with drafting bills, writing up a party platform, and trying to get enough votes to get their presidential candidate elected by the end of the week.

My John with his new friend, Stephen.

The Gala, which took place on the third night of iGovern camp, was a dress-up affair, where students portrayed citizens working to raise funds for their presidential candidate, get the financial support of several lobbyists, (played by PHC students and HSLDA staff) and representing corporations like Google, Rolls Royce, and Disney. Other students took on the roles of ambassadors from countries around the world.

I showed up Tuesday evening with my Nikon D90 in hand, just to take photos of John and the event for his digital scrapbook (which I haven’t started yet, but am hoping to this year—of John’s high school years). While students were simulating going through a security check one by one with a “scanner”, and then having their entrance announced to the group, I was suddenly ushered in by one of the event’s big wigs. “Oh, I see you have a decent camera…How about if you become one of our press people? I can get you around security clearance and directly into the event. I can also get you an official press pass.”

Okay, I was feeling a bit squeamish about having to serve as a lobbyist, but a member of the press? Now, this was something I could get excited about! I’ve always wanted to walk around taking pictures like I was somebody important, I thought to myself.

It was a bit hard to keep a straight face and not smile as I observed some pretty focused conversations going on between these young homeschoolers and the “lobbyists”. Several of them were quite serious and intentional in their tasks. I wanted to verbally cheer them on, but knew I had a role to play, so I worked really hard on keeping a straight face and maintaining my composure as a tough photojournalist.

I did manage to sneak in a hug and kiss for my son John, and even gave him some insider tips for his party’s presidential candidate…I admit, I was just a little biased as his mother. Oh, the crazy things we do as homeschooling moms!

I hope you enjoy the pics of the evening!

How does our party platform look?

There’s time for some girl talk, too

My John, taking time out for a joke amidst all the seriousness 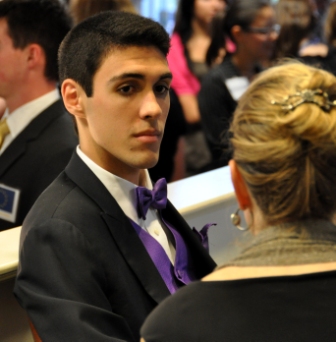 A nonprofit organization representative talking to a student lobbyist 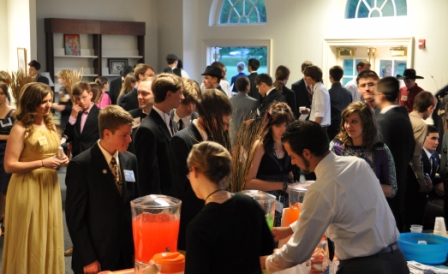